Bruce Springsteen Gives from the Heart 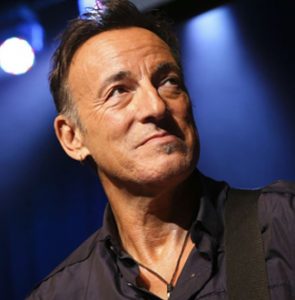 Bruce Springsteen will receive the 2013 MusiCares Person of the Year award at a ceremony to be held February 8th in Los Angeles, two days before the Grammys.

Springsteen is being honored for both his creative accomplishments and charitable work over the years, in particular to help end homelessness and hunger.

“Bruce Springsteen is a truly gifted and Renaissance artist of our time, a national treasure, and an exemplary humanitarian,” MusiCares and Recording Academy President/CEO Neil Portnow said in a statement. “His career is a testament to the power of creative excellence, and his contributions as a philanthropist speak to the tenacity of the human spirit.

“Bruce is synonymous with artistic independence and a passion for causes that are close to his heart,” said Scott Pascuci, chairman of the MusiCares foundation. “His career seamlessly combines inspiration and giving, and it’s a reminder that we can all do our part to make the world a better place.”

He maintains support for food banks and community groups that began back during the Born in the U.S.A. tour. He has given more than 50 benefit performances, including holiday concerts and pre-tour rehearsals, on behalf of non-profits in New Jersey and elsewhere.

He has participated in dozens of multi-artist benefit concerts and Amnesty International’s HumanRights Now! tour.

He has donated concert tickets, backstage passes and meet-and-greet sessions for fundraising auctions.

He has appeared on recordings such as USA for Africa’s “We Are the World,” which raised funds to combat hunger in Africa, and the anti-apartheid anthem “Sun City.” He has provided songs for a number of benefit compilation albums.